Diary of a Seducer

Home Discography Diary of a Seducer 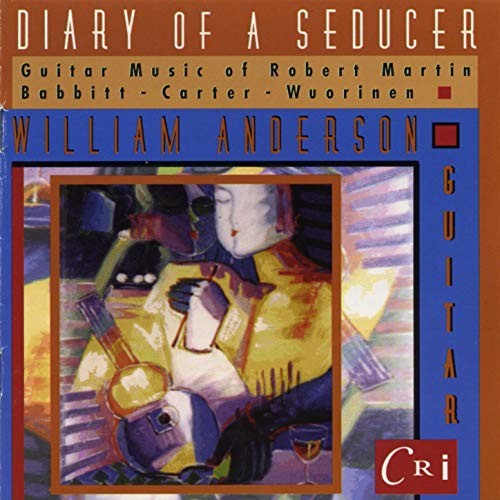 Notes to the Recording

A hand speaks. The guitar gives that hand a voice, a mode of speech, and so makes possible a kind of sign language for the hearing. Robert Martin’s Diary of a Seducer is a sequence of statements delivered by one or more of these speaking hands. The title of the work is taken from that of a painting by Arshile Gorky, but Martin’s interest was apparently not so much in the subject matter of that particular picture as in the general notion of what gives an abstract image wholeness and presence. How can the speaking hand be felt to have said something meaningful, to have said it completely, and to have said nothing redundant along the way? Here are thirty-six answers to that question.

They come in three books, the first comprising fifteen solo pieces, the second fifteen duets, the third six trios. How these answers are phrased, and what they say, is for the listener to discover. But we can all agree on the variety of expressive tones here. Wholeness and presence, for Martin, seem to bespeak particularity of mood and character. Each of these pieces is saying one thing (though it may be a complex and polyphonic thing), and saying it strongly.

Quasi-vocal melody is important to the effect of speech: the guitar is understood American-style, as associated with song, rather than Spanish-style, as having to do with dance. But, particularly in the duos and trios, the music begins to speak also in momentary effects of texture: in the use of harmonics, for example, or in the extraordinary chords that surface in the last two duos and, wildest of all, the penultimate trio. The duos and trios also explore the interplay of similarities slight-ly out of synchrony, as if the two or three hands were getting in the way of each other as each tried to say the same thing. Right at the end comes the most obvious example of this, in Escher-like multiple staircases of scale patterns getting faster and faster.

Here the music is starting to become public, but the essence of the set is intimate and private, and the title seems no accident. The speaking hand seduces the instrument and thereby the listening ear. And the pieces unfold like entries in a diary, given a general wholeness by the personality of the writer and the simple fact of succession. This diary was written, though, over a period of many more than thirty-six days. Each book carries the dateline “1981–1995 in hotels and on planes.”